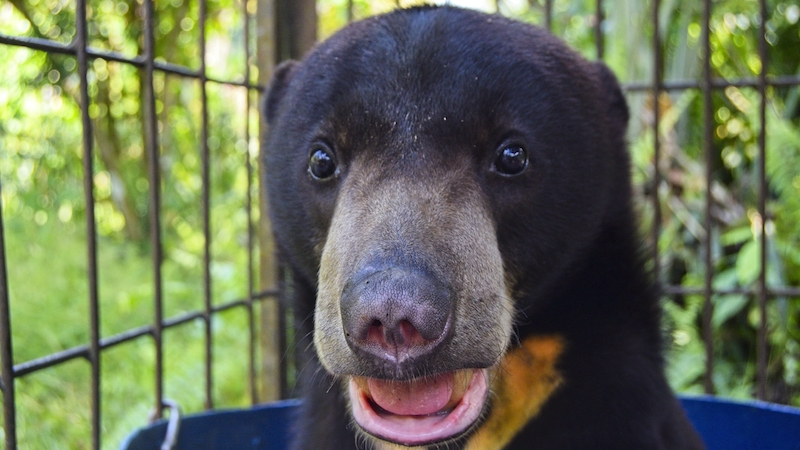 Among the young and innocent animals that arrive at Orangutan Foundation International’s (OFI) Orangutan Care Centre and Quarantine (OCCQ) desperately in need of care are not only orangutans but also sun bears. The OFI Care Centre is currently home to 19 sun bears, who are also victims of the palm oil industry due to the destruction of the rainforest home they share with orangutans and many other endangered species.

Buddy was brought to the attention of the OFI in late 2017. He had been confiscated from a wildlife pet trader in Jakarta, located on the island of Java, before being flown to OFI’s Care Centre in Borneo. Still a cub he had already suffered far too much in his short life, not only was he orphaned at such a tender age – his claws, a sun bears main tool for survival, had been removed. Regrettably there is no chance of Buddy being rehabilitated and released to the wild due to this egregious human act.

Buddy doesn’t let this get him down though. He is a happy go lucky bear, full of life and energy. He never fails to brighten the day of anyone who meets him. For now, Buddy enjoys releases into the learning forest but as he grows older and bigger Buddy will start to become difficult for we humans to handle and interact with. Rightly he should be in the forest along with his own kind. We can offer him the best possible alternative though, with your help. Read More>

No products were found matching your selection.