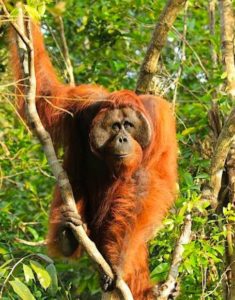 Orangutans are the largest arboreal animals in the world, usually spending over 95% of their time in the trees. They are also among the most sexually dimorphic of primates with males much larger than females. Fully developed adult males can weigh up to 135 kg, while adult females weigh less than half that weight. Adult male orangutans can reach a height of 1.5 metres and can have 2.4 metre arm spans. Orangutans spend almost 100% of their time – eating, sleeping, and travelling – in the forest canopy. Their bodies are adapted to their unique method of arboreal locomotion called “quadrumanous scrambling.” The orangutans’ long, narrow hands and feet are especially useful for grasping branches. Their opposable thumbs and big toes are short to facilitate the hook-like function of hands and feet, particularly in brachiation and hanging on to tree branches. They have highly mobile hip and shoulder joints that allow them to easily move from branch to branch and tree to tree. In orangutans the ligament, ligamentum teres, that binds the top of the femur to the pelvis in humans is much modified. Thus, orangutans can easily do yoga-like poses – like putting their legs behind their heads – that in humans are restricted to the most accomplished yoga practitioners or professional acrobats and circus performers. Furthermore, unlike the other great apes, who are usually black (“Snowflake”, the white gorilla, being an obvious exception), orangutan bodies are covered in thick reddish brown hair. 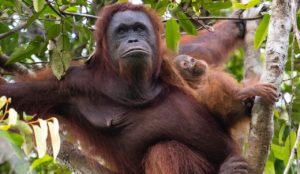 Females become sexually mature when fully grown, although they will not have their first offspring until 15 to 16 years of age in the wild (which is the case at Tanjung Puting National Park in Central Kalimantan.) Males may attain sexual maturity in their teens, but their flanges may not become fully-developed and males may not attain full size until they are in their twenties in Borneo and thirties in Sumatra. The presence of a dominant cheek-padded male within the range of younger adult males may inhibit the development of flanges and full size. Generally, males without flanges are less successful in attracting sexually receptive females than fully mature males with flanges. Thus, sub adult males (such as the ones studied at Tanjung Puting) frequently resort to “forcible copulation.” 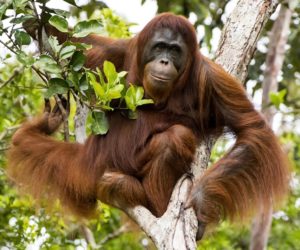 The female orangutan’s menstrual cycle is 29 to 32 days, with menstruation lasting three to four days. The gestation period is approximately eight and a half months. Usually a single offspring is born, weighing about 1.5 kg. The young stay close to their mother until they reach adolescence. Orangutans have the longest “infancy” of the great apes. At Tanjung Puting females typically carry young up to the age of five years when crossing the canopy from tree to tree.

The process of orangutan evolution remains largely unknown due to lack of fossil and sub-fossil evidence. Studies have shown that orangutans likely diverged from the human lineage between approximately 12 and 15 million years ago. Fossil evidence shows that orangutans once ranged as far north as northern India and southern China, and as far south as the island of Java. Fossils such as Sivapithecus and Ramapithecus from the Siwalik hills of Pakistan may represent ancestral orangutans or creatures close to the orangutan line. At the end of the Pleistocene which occurred, more or less, about 12,500 years ago orangutan range diminished to several regions on the islands of Borneo and Sumatra. In Sumatra orangutans became restricted to the northern part of the island. Some estimates for the time of divergence between the Bornean and Sumatran orangutans fall between 0.6 and 2 million years ago. 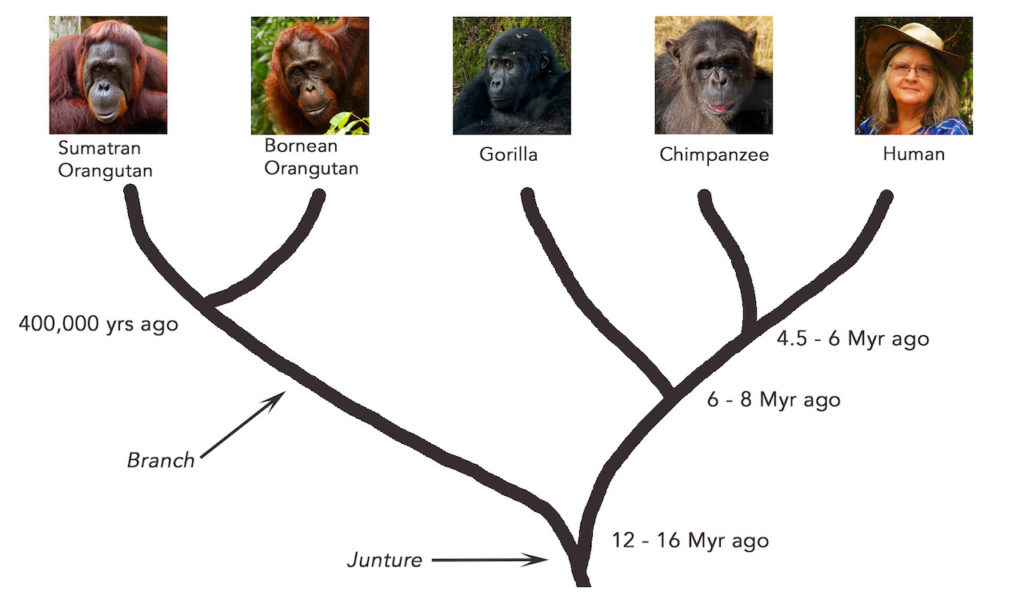