What does orangutan mean? 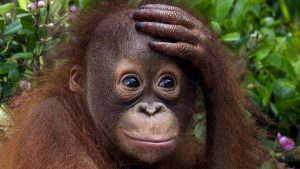 In Malay orang means “person” and utan is derived from hutan, which means “forest” thus, orangutan literally means “person of the forest.”

How many species of orangutans exist? 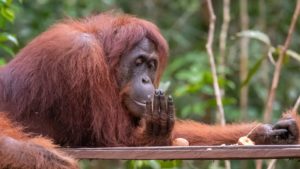 Are orangutans related to humans? 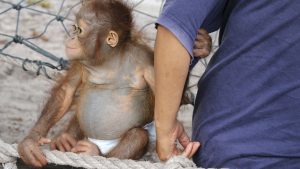 Orangutans belong to the great ape family, along with gorillas, chimpanzees, bonobos and humans. The orangutan is Asia’s only great ape, and one of humankind’s closest relatives – in fact, we share 97% of the same DNA!

Why are orangutans in danger of becoming extinct? 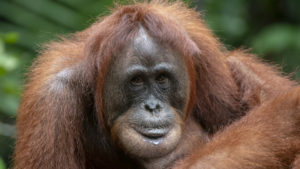 The International Union for Conservation of Nature (IUCN) Red List of Threatened Species lists all three species of orangutans as critically endangered, with populations in decline. The IUCN Red List assessments indicate there are approximately 14,600 Sumatran orangutans, 104,700 Bornean orangutans and fewer than 800 Tapanuli orangutans remaining in the wild, however actual numbers are likely to be less that these estimates. Without drastic intervention, orangutans may soon be extinct as biologically viable populations in the wild.

What are the main threats to orangutan populations?

The major reason for the sharp population decline is habitat loss due to deforestation. The biggest threat to orangutans is the destruction and degradation of their tropical rainforest habitat. Human activities such as logging, conversion of forest to palm oil plantations, mining and urban expansion are the major factors contributing to the decline of orangutan populations. If their forest habitat continues to decline at the current rate, orangutans could become extinct as populations in the wild within decades.

Where do orangutans live? 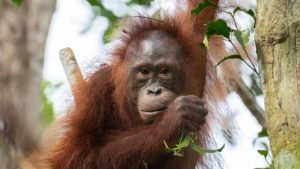 Orangutans live in only two places in the world, the islands of Borneo and Sumatra in South East Asia.

What do orangutans eat?

Orangutans are primarily fruit eaters and spend a large portion of daylight hours searching for and consuming food. About 60% of their diet includes fruit such as durians, jackfruit, lychees, mangosteens, mangoes and figs. They also consume leaves, bark, flowers, insects and bird eggs. Orangutans are known as the “gardeners” of the forest, playing a vital role in seed dispersion and germination, and maintaining the health of the forest ecosystem. Unfortunately, climate change is affecting the fruiting season, which impacts the orangutan’s ability to forage and find food.

Orangutans have tremendous strength. Like humans, orangutans have opposable thumbs. Their big toes are also opposable which helps them to hold onto trees and hang upside-down from branches for long periods of time to retrieve fruit and eat young leaves. Fully developed adult males can weigh up to 135 kg, while adult females weigh less than half that weight. Adult male orangutans can reach a height of 1.5 metres and can have 2.4 metre arm spans.

Do orangutans live in groups or alone? 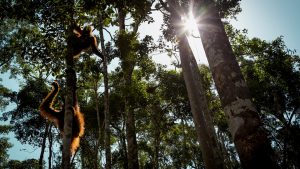 Orangutans are semi-solitary but are somewhat social. Mature males appear to be totally intolerant of each other. The meeting of two mature males results in either aggression or avoidance. Adult male participation in social groups is limited to sexual “consortships” with adult and adolescent females.

Do orangutans live in trees or on the ground? 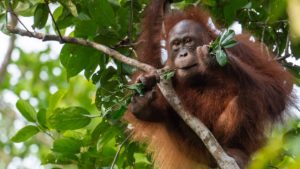 Orangutans are the largest arboreal animal on the planet and usually spend over 95% of their time in the trees. They travel from branch to branch by climbing, clambering, and “brachiating” – a form of arboreal locomotion in which primates swing from tree to tree using only their arms. When on the ground, orangutans walk on all fours, using their palms or fists. Unlike the African apes, orangutans are not morphologically built to be knuckle-walkers.

Where do orangutans sleep? 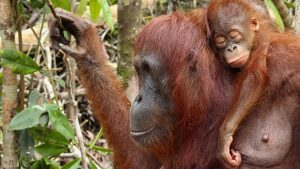 Each night orangutans construct a new sleeping nest from branches within a tree. They sometimes construct a little ‘roof’ to protect them from the rain.

How often do orangutans give birth? 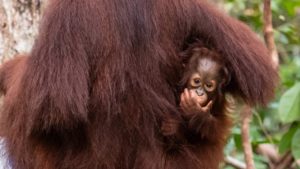 In the wild female orangutans usually give birth to their first offspring when they are 15-16 years of age. In captivity females as young as eight years old have given birth. Orangutans give birth every 6-8 years. The gestation period is 8.5 months and usually a single infant is born weighing around 1.5 kgs. Another reason orangutans are vulnerable to extinction is their slow productive rate.

How long does a baby orangutan live with its mother? 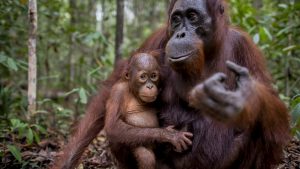 The relationship between a mother and baby orangutan is very special. For the first few years of their life, a young orangutan holds tight to their mother’s body as she moves through the forest canopy. Young orangutans learn almost everything from their mothers, including where to find food, what to eat (and how to eat it), and how to build a sleeping nest. Mothers also help protect their young from predators. Orangutan infants will sometimes be carried until they are 5 years old and be breast-fed until they are 8 years of age.

Why do male orangutans have big cheeks? 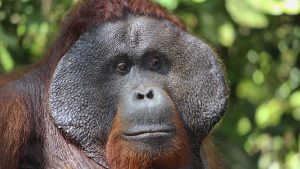 When male orangutans reach maturity, some of them develop large cheek pads called “flanges”. They also develop large throat sacks to make loud verbal noises called “long calls”, which are used to warn other rival males and attract females. Sometimes the sound of a long call can carry for almost a mile! When males are fighting, they charge each other, grapple, and bite each other’s heads and cheek pads. They sometimes look like Sumo wrestlers. 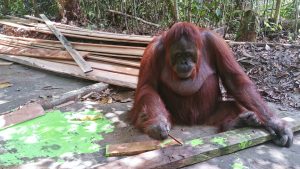 Orangutans are extremely intelligent mammals. They have been observed making simple tools to scratch themselves, forage for insects and collect honey. They also use leafy branches to shelter themselves from the rain and sun, and use leaves as gloves to help them handle spiny fruits and branches.

When is Orangutan Awareness Week? 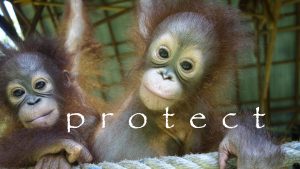 November 1-7 is Orangutan Awareness Week, which was started by Orangutan Foundation International (OFI) in 1996 to commemorate the establishment of Camp Leakey in the first week of November, 1971. What began as a memorial to honour the work of Dr. Birute Mary Galdikas has become a world-wide celebration to encourage action to save orangutans.