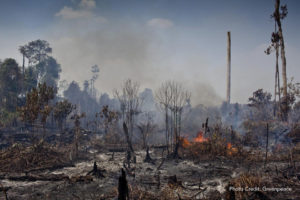 The destruction and degradation of the tropical rain forest, particularly lowland forest, in Borneo and Sumatra is the main reason orangutans are threatened with extinction. This has been caused primarily by human activity (intense illegal logging, conversion of forest to palm oil plantations and timber estates, mining, clearing forest for settlements, and road construction) and also by large-scale fires facilitated by the El Nino weather phenomena. Additionally, the illegal animal trade has been a factor in the decline of wild orangutan populations. Finally, orangutans are occasionally hunted and eaten by some of the indigenous peoples of Borneo as well as migrant loggers and plantation workers who do not have dietary prohibitions against eating primate bush meat.

At one time the world’s wild orangutan populations likely included upward of hundreds of thousands of individuals, but current estimates indicate far fewer wild orangutans now remain. During the past decade orangutan populations have probably decreased by 50% in the wild. Although past climate shifts may have been responsible for some of this decline, orangutans are primarily threatened by human activities and development that cause the loss and degradation of their forest habitats. Currently, the International Union for Conservation of Nature (IUCN) has classified all species of orangutan as Critically Endangered.

The most recent estimates of orangutan population sizes and distributions can be found at the International Union for Conservation of Nature (IUCN) Red List of Threatened Species lists. All three species of orangutans are listed as critically endangered, with populations in decline. The IUCN Red List assessments indicate there are approximately 14,600 Sumatran orangutans, 104,700 Bornean orangutans and fewer than 800 Tapanuli orangutans remaining in the wild. Due to substantial orangutan habitat loss on both islands, it is probable that current numbers on both islands are actually below those given on the IUCN Red List. Approximately 2,000-3,000 Bornean orangtuans were killed every year in the past four decades alone, representing a loss of more than 50% of the original population in just 40 years. At this rate of killing, orangutan populations could be reduced to extinction in the next 50 years.

Want to find out how you can help orangutans? Click here