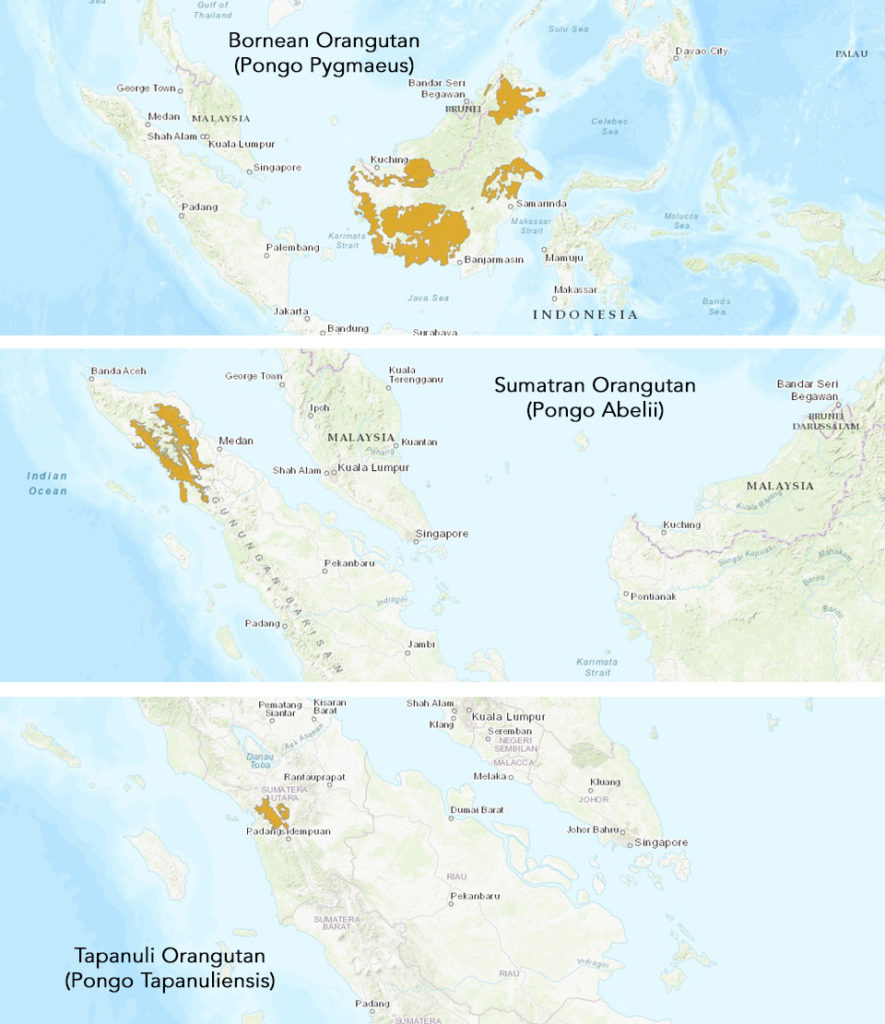 In the past orangutans were dispersed throughout Southeast Asia all the way into southern China and were found on the island of Java and in southern Sumatra. Orangutans are now found only on the islands of Borneo and Sumatra with the Sumatran species limited to the northern part of the island. Sumatran orangutans are fragmented into 9 separate populations, all of which are located in the Indonesian provinces of Aceh and North Sumatra. Bornean orangutans are much more widely distributed and are found in Kalimantan, Sabah, and Sarawak. No permanent orangutan populations have been reported from Brunei.

Orangutans on both islands primarily inhabit peat swamp forests, tropical heath forests, and mixed dipterocarp forests at altitudes of less than 1,000 metres (3,281 feet) above sea level. Orangutan population density has been shown to correlate positively with the level of fruit availability. This means that in forests where a higher abundance of fruit and fewer or less drastic periods of seasonal fruit shortages occur, orangutans are found to live at much higher densities than in other forests. Generally speaking, since Sumatran forests seem more productive than forests in Borneo, Sumatran orangutan populations are denser than Bornean orangutan populations. Orangutans living in peat swamp forests live at higher densities than in other forest types. 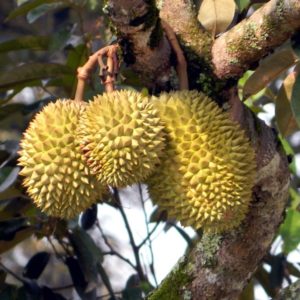 Orangutans primarily eat ripe fruit, along with young leaves, bark, flowers, honey, insects, vines, and the inner shoots of plants. One of their preferred foods is the fruit of the durian tree, which has a very strong smell and tastes somewhat like sweet, cheesy, garlic custard. Cultivated durian is known as the “king of fruits”, possibly for its large size, strong smell, and unusual taste. Orangutans eat wild durians in the forest but also enter cultivated durian trees in people’s gardens. Orangutans discard the skin, eat the flesh, and spit out the seeds, acting as major seed dispersers for this fruit as well as for many others. In some regions, orangutans also occasionally eat soil, thus ingesting minerals that perhaps neutralize the high quantities of toxic tannins and acids in their primarily vegetarian diet. In Sumatra orangutans occasionally eat slow lorises, taking them out of tree holes where these small, nocturnal prosimians sleep during the day.