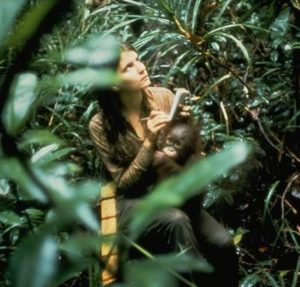 This year marks 50 years since OFI President and Founder Dr. Biruté Mary Galdikas made camp in the jungles of Borneo to begin her pioneering study of orangutans, one of humankind’s closest living relatives. This year we are celebrating this momentous anniversary to honour Dr. Biruté for dedicating her life to the conservation of orangutans and our world’s endangered biodiversity and ecosystems. Dr. Biruté has saved the lives of thousands of orangutans and has helped ensure that wild orangutan populations and their tropical rainforests will thrive into the future.

As one of the world’s legendary “Trimates” and pioneering female scientists, Dr. Biruté helped challenge and change scientific paradigms – that we humans are separate from Nature and our closest living relatives, the Great Apes. She was among the first in the 1980’s to draw attention to the role that destruction of ancient ecosystems had in facilitating the emergence of newly infectious diseases.

Dr. Biruté initially discovered more about orangutans than was ever known. During her first week she helped confiscate an orphan infant orangutan, thus beginning her ground-breaking work in orangutan rehabilitation and protection. The orphaned orangutan eventually grew up and returned to the wild. She quietly set her life’s work to understanding Nature and sharing her knowledge with the world. This work has inspired generations, especially young girls, to follow their dreams and work towards environmental and social justice. Dr. Biruté’s passion for orangutans and forests has influenced our collective understanding of the connection between ape conservation and protecting Earth.

We honour our hero, Dr. Biruté. We honour her for her dedication and for being our inspiration. We honour her for calling to the world the importance of uniting to protect our future. She has called for us to find ways to live together with Nature, ways that promote human, wildlife and ecological health.

As one of the three iconic “Trimates” she was first featured on the cover of National Geographic magazine in 1975. This coverage brought her image, her scientific findings, and her love of orangutans and forests into the homes of millions worldwide. We have chosen this image of Dr. Biruté and orphaned orangutans at Camp Leakey as our official seal for her inspirational 50th Anniversary.

We are beginning our celebrations of this momentous milestone in honour of her 75th birthday this year May 10th, 2021. Over the next year we will feature Reflections from Dr. Biruté, features of the orangutans which she has known, and which have shaped her journey, as well as stories from many people whom she has inspired along the way.

Please check back here and sign up to join our newsletter for updates and news about our celebration events later this year!

We hope you’ll join us in celebrating… 50 Years In The Field.