As I sit here at my desk writing to you, I reflect on where I was almost exactly fifty years ago this month. It was November 1971 when I arrived at the place I named Camp Leakey. After three years of waiting, I had finally arrived in Borneo, the large forested tropical island where orangutans live. In my younger days, I was sustained by a vision that I would go to Southeast Asia as soon as I could and study orangutans, the near-mythical great apes about which virtually nothing was known. I would learn more about them than anyone else had ever learned and share that knowledge with the rest of the world. Now I had finally arrived in the depths of Borneo’s rain forest. I began work the next day. 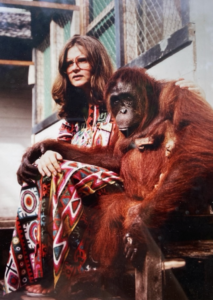 Over the decades my colleagues, my husband Pak Bohap, and I collected thousands of hours of observation on wild orangutan behavior, ecology, and tropical forest habitat. But the early years were not easy. People later saw photos of me in the lush, verdant green forests of Borneo following orangutans as they moved overhead in the canopy and assumed it was a glamorous undertaking. But the glossy images didn’t show the sweat pouring down through my clothes, the exhaustion of sixteen-hour days wading through deep, dark, acidic water in the omni-present peat swamps, the illnesses, the hunger, and the thirst. I drank swamp water with its teeming parasites, when the boiled water I carried from camp ran out, with the inevitable medical consequences. Nor did photos show the infections from spider, leech, and mosquito bites that left my hands so swollen I could barely move my fingers. And my legs scarred for life. Never mind the unique intimate experiences with snakes, most venomous. And then there were the armies of fire ants!

But we persevered and now we know more about orangutans than we ever dared hope. Nonetheless, there is still so much more to learn of orangutans, who may live well into their fifties and give birth only once every eight years. We continue the long-term research which becomes even more valuable by the day as time rolls by.

Now when I think back on the early days, it’s not the hardships I remember best, but my friendships with orangutans like First Mother Siswoyo who was the first wild born ex-captive female orangutan in Camp Leakey to give birth. She became one of my best friends in the entire world. She was of a different species but proved a better friend than most humans. I would spend hours sitting with her on my porch and verbal communication was not necessary. The eyes revealed all that needed to be said.

Siswoyo died years ago but her spirit lives on in my heart. 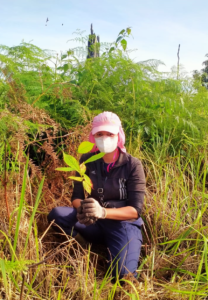 All orangutans are in danger, including Siswoyo’s progeny. Orangutan populations are going extinct in the wild because of massive deforestation. Only about 20% of Borneo’s ancient forests remain untouched. Everything else is gone, burned, degraded, violated, extensively fragmented, or recovering. Without more tracts of forest, wild orangutan populations will have a difficult time surviving. While it is of the utmost importance to protect existing forests, we also need to begin re-planting more urgently some of the forests that once existed on Borneo. As forests diminish, orangutans starve and die. Time is of the essence.When we established our tree-planting Seed and Sapling Campaign our goal was to plant 2.5 million trees and begin replenishing the forests that have disappeared. COVID-19 disturbed that plan as our staff alternated self-isolating at home. You can’t plant trees remotely from home! However, we have managed to plant over 400,000 native trees already. But massive wildfires in 2019 and rampant deforestation since 2017 decimated orangutan habitat even further. Letting our close blood kin, orangutans, who have lived on this earth for at least two million years, go extinct would be tragic beyond words. Orangutans such as Siswoyo’s grandchildren will survive only if they have food which means forest. 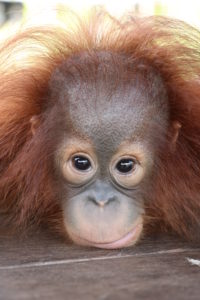 Supporting OFI’s native tree-planting Seed and Sapling Campaign will provide hope for orangutans and myriad other species in one of the most species-rich places on Earth, Borneo. Please support our work and help us plant another 2 million native trees for orangutans and ourselves! One hundred fifty dollars covers most of the wages paid to our reforestation team for one day of planting. We plant for the entire year. We know how to do it; we just need the funding.This year OFI celebrates my 50-year-long effort to understand and protect orangutans. I will not stop fighting for orangutans and their forest homes. I hope you will fight with me.In deep gratitude for your continued support and friendship for orangutans,