We couldn’t be more grateful to Taronga Zoo’s senior veterinarian Dr Larry Vogelnest, who volunteered his time to come to Borneo recently, as part of an extraordinary team of Australian vets, to perform a world first surgery on little sun bear Hitam. 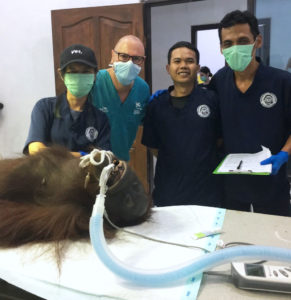 In Larry’s own words … ‘I decided to become an Ambassador for OFI Australia after a recent visit to the OFI Care Centre in Kalimantan, Borneo. I was a member of a specialist veterinary team that performed life-changing surgery on a sun bear with a severely deformed pelvis; the result of poor nutrition while being kept illegally as a pet after her mother was killed. We also examined and treated an orangutan who had sustained horrendous injuries as a result of being beaten by people.

While at the OFI Care Centre and visiting Tanjung Puting National Park, the air was thick with smoke from illegally lit fires. At the time the OFI Care Centre staff also rescued and translocated an adult male orangutan found wandering through a village after having been forced out of the forest by the fires. These cases and the fires brought home to me the desperate and critical need for action to protect what is left of Kalimantan’s forests and wildlife.

OFI plays a crucial role in facilitating this action while also providing sanctuary and care to displaced, surrendered and rescued orangutans, sun bears and other animals.

My role as an OFI Australia ambassador is an expression of support for the critical work they do.’

Dr. Larry is the Senior Vet at Taronga Zoo in Sydney and graduated with a BVSc degree from the University of Sydney in 1984. He then worked in mixed private practice before travelling overseas and working in England.

On return to Australia he worked in an avian practice in Sydney before starting as a Veterinary Intern at Taronga Zoo Sydney in 1990.  During this time, he completed a Masters in Veterinary Studies in Wildlife Medicine and Husbandry.

Since completing his internship, Larry has been employed by the Taronga Conservation Society Australia and is currently the Senior Veterinarian at Taronga Zoo Sydney. Together with a multidisciplinary veterinary team, he is responsible for the health of the Zoo’s animal population and sick, injured and orphaned native Australian wildlife admitted to the Taronga Wildlife Hospital.

In 1996 Larry gained membership to the Australian and New Zealand College of Veterinary Scientists by examination in Zoo Medicine.  In 1998 he took a 12-month sabbatical and worked at Melbourne Zoo for two months and Victoria’s Open Range Zoo at Werribee for 10 months, where he was employed as their first full-time veterinarian.

Larry specialises in the health and reproductive management of small populations including ex situ breeding programs for endangered species. He has participated in and advised on both in situ and ex situ components of numerous conservation projects, both in Australia and overseas.