An urgent appeal for sweet little sun bear Buddy, who is our very first Foster Bear

Among the young and innocent animals that arrive at Orangutan Foundation International’s (OFI) Orangutan Care Centre and Quarantine (OCCQ) desperately in need of care are not only orangutans but also sun bears. The OFI Care Centre is currently home to 19 sun bears, who are also victims of the palm oil industry due to the destruction of the rainforest home they share with orangutans and many other endangered species.

Buddy was brought to the attention of OFI in late 2017. He had been confiscated from a wildlife pet trader in Jakarta, located on the island of Java, before being flown to OFI’s Care Centre in Borneo in April, 2018. Still a cub he had already suffered far too much in his short life, not only was he orphaned at such a tender age – his claws, a sun bears main tool for survival, had been removed. Regrettably there is no chance of Buddy being rehabilitated and released to the wild due to this egregious human act. 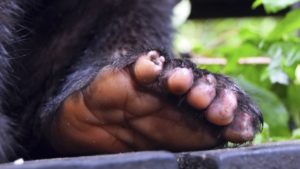 Buddy doesn’t let this get him down though. He is a happy go lucky bear, full of life and energy. He never fails to brighten the day of anyone who meets him. For now, Buddy enjoys releases into the learning forest but as he grows older and bigger Buddy will start to become difficult for we humans to handle and interact with. Rightly he should be in the forest along with his own kind. We can offer him the best possible alternative though, with your help.

OFI has received an increasing number of sun bears in the last several years. To date OFI has provided 3 forest sanctuaries for sun bears of various ages and sizes as they fall victim to the vanishing rainforest. Sun bears also have to contend with demand from the wildlife pet trade and the desire for bears body parts in Eastern medicine. Space both in and outside of OFI is always an issue and being kept in a small environment is the complete opposite of how a sun bear has evolved to function. Stressful behaviors such as pacing and self-suckling are a symptom of this, symptoms that lessen with access to lush green forest. 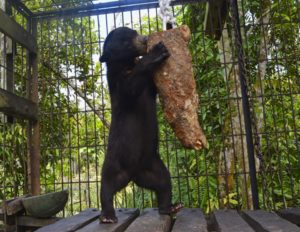 For Buddy to have a semblance of life in the wild and for his long term welfare; OFI wishes to provide him with a one-hectare forest sanctuary with an adjoining sleeping enclosure. This sleeping enclosure would also include a platform and hammock where Buddy can sleep and be fed. Within this forest sanctuary Buddy can learn how to live a life he was previously denied, being able to roam freely throughout. He can dig and sniff through the Earth, make himself a den, forage for food and learn how to be a sun bear. With his lack of claws Buddy does find it difficult to climb but if a tree falls to the ground he doesn’t hesitate to investigate. Buddy won’t be lonely either; he will have friends to play with as there are other sun bears at OFI that also need new housing. This sanctuary won’t just benefit Buddy, it will also be for other bears that have suffered heartache and loss.

This new enclosure will cost US$45,000 all up. Some of this money has already been raised by Sun Bear Outreach. We hope to make a start on the construction of the sleeping enclosures this year, but we are still short of our target to complete it. Every little bit will help.

Please foster little Buddy to help us provide him with the opportunity to enjoy life in safety and comfort, as close as we can possibly give him to a life in the wild – or please consider a donation to help us build him and his friends a one-hectare forest sanctuary by calling 07 5527 5226 in Australia, or clicking on the link below.