With deep gratitude and appreciation we thank everyone who has so generously contributed to our cause during this financial year. With your help we continue to support the vital orangutan and forest conservation efforts of Dr Biruté Mary Galdikas and Orangutan Foundation International (OFI) in Borneo.

Orphan orangutans need your help more than ever!

Our goal at OFI Australia is simple; to care for orphaned, injured and displaced orangutans at OFI’s Care Centre and Quarantine; and to secure habitat for their eventual release.

The infant orangutans that come into our care have lost their mothers. In nearly every case, their mothers have been killed and their terrified babies ripped from their bodies, destined to become victims of the highly lucrative illegal pet trade. These traumatised rescued infants will live at the Care Centre for many years, while being loved and cared for by their surrogate human mothers, who will teach them the skills they need to survive as adult orangutans in the wild. The journey to freedom is a long and expensive process, but for orangutans like Lear, who was recently released, it is worth the wait, and every cent!

We currently have hundreds of orphaned orangutans in our rehabilitation program who will one day be released back to the wild. Thanks to our wonderful team of caregivers and help from incredible donors like you, these rescued orphans are being given a second chance. Orangutans like Holland, Kobe, Bobble and Charlie, who are pictured below.

By supporting OFI Australia you are helping to ensure these infants are provided with food, shelter and love along with the skills they need to grow into strong, healthy orangutans; and assist us to secure land so they may one day be released to a protected and patrolled forest home where they can be wild and free. 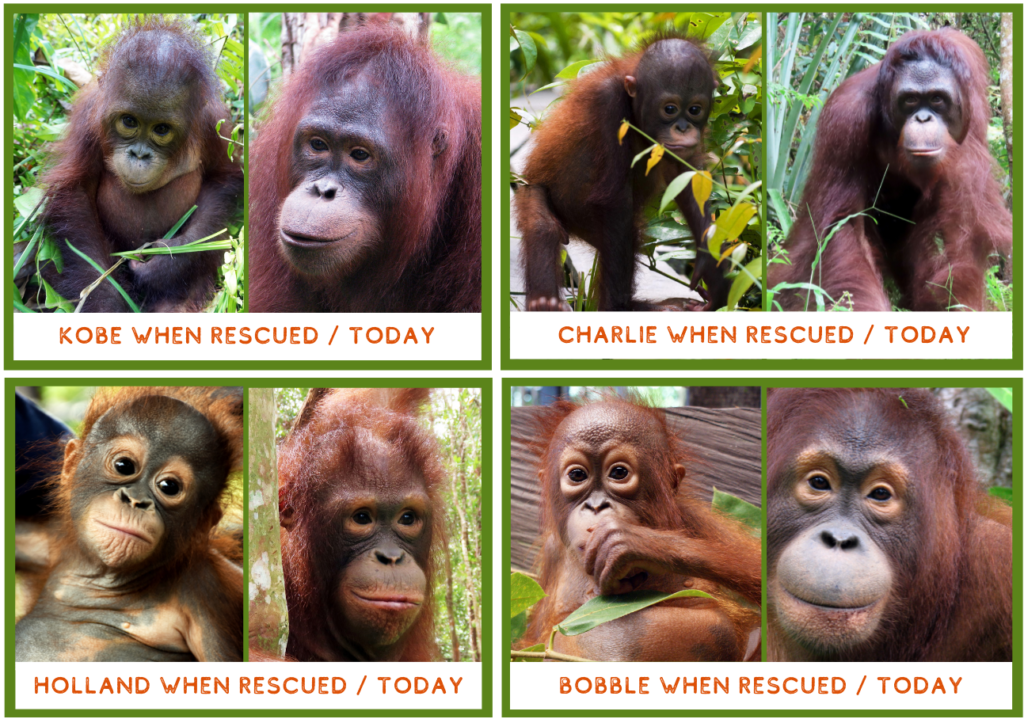 Will you help us to secure a future for our orphan infant orangutans?

With the end of the financial year is upon us, we are asking you to please help orangutans by making a tax-deductible donation. If you donate by June 30 your donation can boost your tax return, but more importantly, you can help save this critically endangered species and their forest home for future generations to come.

We are so grateful for any support you can give. Our work to protect orangutans is as critical as ever. We can’t do it without you!

Lear’s journey to freedom – from rescue to release

Lear first arrived at OFI’s Orangutan Care Centre in 2005 as a tiny, helpless infant. We don’t know exactly how Lear lost his mother all those years ago, but she was most likely killed by humans. Sadly, this is often the reason infant orangutans come into our care.

Little Lear had a deep affection for his caregivers who did their best to fill the role of his mother, who normally would have cared for him for the first 7 to 10 years of his life. He would often sit in a caregiver’s lap, staring deeply into her eyes and holding her hands. As he grew, his mischievous and playful personality shone and he could often be seen rolling around the jungle gym in a burlap sack, bumping into his orangutan friends as he went!

As Lear matured, his carers dedicated time to teach him vital skills to survive in the forest. During his trips to the Learning Forest, he was taught how to climb, forage for wild fruits and he even figured out how to build his own sleeping nests out of branches and leaves, an essential skill for thriving in the wild.

As he reached adolescence, the day eventually came when it was no longer safe for Lear to continue going out to the Learning Forest. Adult male orangutans are solitary, extremely large and strong and can be very aggressive with other males or even humans. So, with his forest skills finely honed and his health in great condition, he was put on the list of priority candidates for permanent release to the wild.

Releasing an orangutan to the wild is a complicated process. We need to find a safe location in the forest protected from the threats of encroaching palm oil plantations, poaching and illegal logging. There can’t be any other adult male orangutans living nearby as they are intolerant of each other and may fight. We must also acquire the necessary Government permits, and most importantly, ensure the orangutan is perfectly healthy and passes all medical checks. This is for their safety as well as the wild orangutans they may encounter. Needless to say, releasing an orangutan back to the wild requires a lot of patience and perseverance.

While Lear waited for his freedom, he developed the impressive cheek pads and throat pouch of a dominant adult male orangutan. Our enrichment team ensured Lear received plenty of activities to keep him occupied and stimulate his mind and senses while he waited.

Eventually the day came for Lear to return to the wild. On the morning of his release, Lear passed his final health checks and was transferred to a transport cage. Travelling by truck and boat, Lear and the release team, consisting of OFI veterinarian, rangers, and other staff, as well as officials from the Forestry Department, made their way deep into the forest.

The team tied a rope to the door handle at the top of Lear’s transport cage and carried the other end of the rope back toward the boat. Once everything was ready to go, they tugged the rope to pull the cage door off and away from the platform. Without hesitation, Lear deftly hopped out.

While many adult male orangutans are agitated or even aggressive after getting out of their transport cages, Lear was very calm. He walked around the feeding platform, curiously observing his surroundings. Lear then ventured a short way into the forest and climbed into some low branches. He spent several minutes serenely staring at the humans who had brought him there. We wish we could know what Lear was thinking as he gazed upon the release team. Lear seemed to be absorbing it all with the mindfulness of a buddha. Lear climbed deeper into the vegetation, looked back at the humans one more time, and finally started to disappear into the trees.

Experienced OFI rangers followed Lear for the first 10 days after his release to make sure he was adjusting well to his new life. While some orangutans quickly disappear after being released, others stay nearby OFI’s forest camps, frequently visiting our feeding platforms for supplemental fruits and vegetables and keeping tabs on what the humans are up to. The path an orangutan chooses to take once he is released depends on his background, personality, and many other factors. What matters is that he has choices.

There is no telling which course Lear will choose for himself! But as long as he is within our reach, we will always keep a loving eye on him. We will offer him food whenever we see him. If he ever appears to be sick or injured, we will give him medical attention. We will provide Lear with the space to live the wild life he deserves, but we will always be here if he needs our help. He will never be totally on his own if he doesn’t want to be.

Lear is one of the lucky ones. With your financial support we can continue our vital work rescuing and caring for orphaned orangutans and purchasing land for their future release. Your help will ensure orangutans like Holland, Kobe, Bobble, Charlie can follow Lear’s path to freedom and be released back to the wild one day in their future!