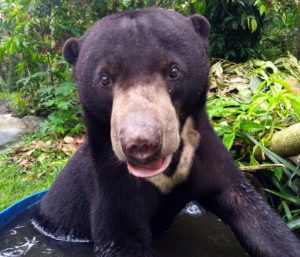 At the end of September OFI began work on a one-hectare enclosure for Buddy and his friends. A forested site was selected and measured. Local workers have been hired to carry out the construction. First, a path needed to be cleared for the outer wall. The foundations for five sleeping enclosures will be laid while the main wall is being built. Thus, the sleeping enclosures can also be installed. Once finished they will be kitted out with platforms, hammocks and blue barrels. There is also a small training area and a concrete pool within the bear enclosure. We expect to move the bears to their new home in early 2020.

In the meantime, Buddy remains as active and alert as ever. He still enjoys his daily forest releases with friends Sunny and Cora who will join him in the new enclosure. There will also be a fourth bear, orphaned male cub Kacong, who arrived earlier this year. He is still quite small, so he is being kept separately from the others for now. However, he and Buddy have had several meetings as Buddy has been brought over to visit Kacong from outside his sleeping enclosure. There are never any guarantees each party will get along as males will avoid each other in the wild. Needless to say, Buddy is thrilled to have a new playmate. He particularly enjoys sitting with his back to Kacong who reaches his paws out to touch Buddy’s back and gives him a good scratch. We are sure it won’t be long before they can play together properly.

Buddy is also making the best of things and has begun following his friends skywards. Despite having no claws, he has found a way. He hugs closely to the trees, grips with his paws and shimmies up. At first he would only climb a few feet but has slowly grown in confidence and is now reaching heights of over 10 feet. This is another reminder of Buddy’s tenacious spirit and is a joy to behold.

Buddy enjoys playing but he can get very overheated. Bears, like dogs, have no sweat glands and so regulate their body temperature via the bottom of their feet (pads) and panting. During releases, especially in the dry season where there is less rain, Buddy needs a way to cool down. His solution is to run back to his sleeping enclosure which is left open for him where he submerges himself in his water barrel. Once he has had a moment to cool off, he comes right back out for some more play. He will repeat this as often as he needs. This means it is usually quite easy to get him to come home after some hours of play!

Buddy has come a long way since his arrival in April 2018 and in his next update we look forward to telling you about how he is settling into his new home. This wouldn’t have been possible without the generous support of his foster parents – you have made this happen. OFI and Buddy are eternally grateful. 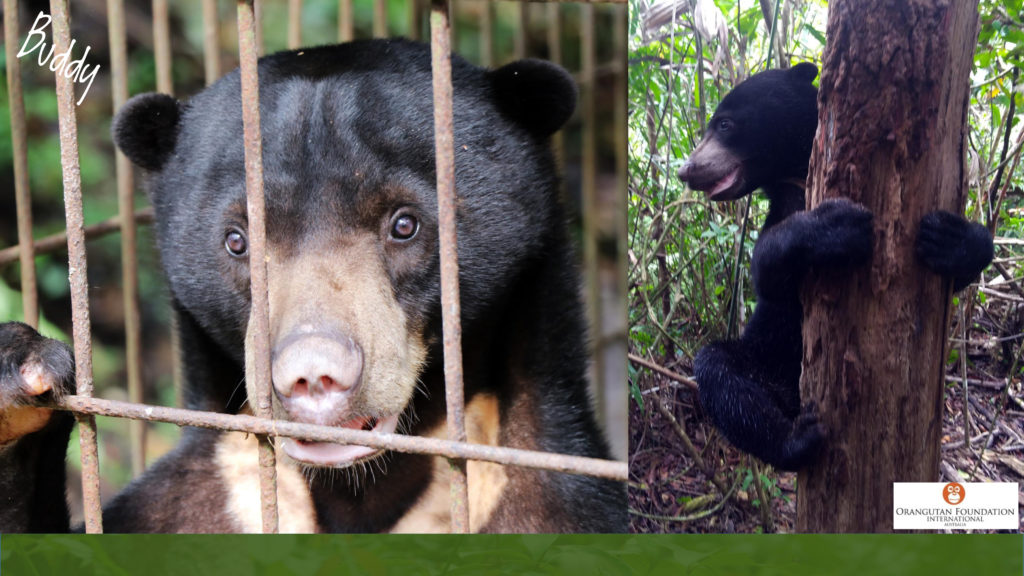