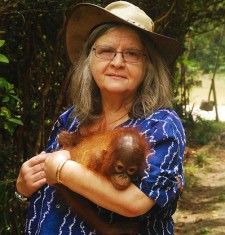 Scientist, conservationist, educator: for over four decades Dr. Biruté Mary Galdikas has studied and worked closely with the orangutans of Indonesian Borneo in their natural habitat, and is today the world’s foremost authority on the orangutan.

Galdikas was born after the end of World War II, while her parents were en route to Canada from their homeland of Lithuania. Galdikas grew up and went to school in Toronto. After checking out her first library book, Curious George, at the age of six, Galdikas was inspired by the man in the yellow hat and his unruly monkey. By the second grade, she had decided on her life’s work: she wanted to be an explorer.

When her family moved from Canada to the United States in 1964, Galdikas had already completed a year of studies at the University of British Columbia (UBC) in Vancouver. She continued her studies of natural sciences at the University of California at Los Angeles (UCLA), quickly earning her bachelor’s degree in psychology and zoology in 1966 and her master’s degree in anthropology in 1969. It was there as a graduate student that she first met Kenyan anthropologist Dr. Louis Leakey and spoke with him about her desire to study orangutans.

Although Dr. Leakey seemed disinterested at first, Galdikas persuaded him of her passion. After three years, Dr. Leakey finally found the funding for Galdikas’ orangutan studies, as he had previously done with both Jane Goodall and Dian Fossey for their respective studies on chimpanzees and mountain gorillas.