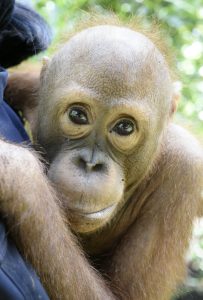 Tommy is a sweet natured and shy infant orangutan who enjoys being in the forest. Each day when Tommy is taken to the infant playground, he immediately leaves the playground and bounds off into the forest. Tommy relishes his time in the forest. It shows!  With his newly acquired forest skills, Tommy is climbing higher and higher and often can be seen high up in the top of the canopy. Tommy likes to forage for leaves and spends time playing with branches, often making a day nest. Nest making seems a favorite hobby and Tommy practices his skills any chance he gets. Tommy can also often be seen observing older orangutans foraging and then copying them. By doing this Tommy is learning which wild foods to eat through observation and is gaining important forest skills.

Tommy is still a shy orangutan and often scared of new people, especially men. Yet Tommy is also inquisitive by nature. Perched high in the top of a tree, Tommy will observe what is going on down below him. If he wants to join in with his friends on the forest floor, Tommy will often look around him first to see if anyone is watching. Then he will silently slip down a tree to the ground. Often his caregivers will still be looking into the treetops trying to locate Tommy, as Tommy slips between their legs to get to his friends on the forest floor! Tommy likes to fade into the background, but he can more than hold his own when he plays with his peers! He loves play wrestling with friends Ryan and Charlie on the ground.

Tommy may be an introvert but he is a sweet and handsome young orangutan who is sociable with his peers.  For now, Tommy is still an infant and content to play safely in the OFI Nursery Forest close to his caregivers, learning and practising the skills he will need in the wild someday in the future.