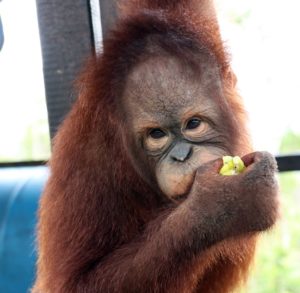 Jeffrey Jr continues to be an inventive and resourceful orangutan. If he is presented with a collection of branches and leaves, he will arrange them into various patterns on the ground. These are the beginnings of nest making which he will transfer to the trees given time. Following this, he will dig a hole and during the rainy season it isn’t long before he strikes water. He then rinses one of the bigger leafy branches like it’s a piece of laundry and stabs it into the ground flag-like, staking his claim on the land. He drapes several branches over his head demonstrating branch versatility as a plaything. He makes an excellent salesperson as other orangutans want to have a turn with these branches. Female infant Benjamine tries to grab some branches from his hand but Jeffrey is not in the mood to share. He quickly gathers up his branches and climbs a tree to make sure they are safe and protected.

As well as a new playground, a new rope/tyre bridge has been constructed to connect it to the original playground. This means infant orangutans can journey between the two playgrounds with ease. One minute Jeffrey can be seen traversing the bridge before venturing into the forest the next minute. There is no telling where he will go. His caregivers must keep a close eye on him. In his travels he finds a stray tyre left in the playground. One of the bigger infant males, Sparky, is passing by and Jeffrey begins rolling the tyre in front of Sparky. Sparky watches impassively as Jeffrey attempts to show off his strength. Jeffrey doesn’t need much in the way of an excuse for showboating.

All this activity can make a young orangutan hungry. The smelly fruit durian is just as alluring as the less offensive watermelon. As the caregivers pass the fruit throughout the play area, Jeffrey ensures he gets some of both the durian and the watermelon. Once he has eaten, Jeffrey always show his appreciation. He sidles up next to his caregivers and, not content with just being close, he reaches out and grabs one by the arm. He gently pulls her down to his level and proceeds to sit in her lap. Seeing Jeffrey play like this is a continual delight.  He has a zest for life. He wants it all and he wants it now. We’ll see if we can keep up. We know he will! 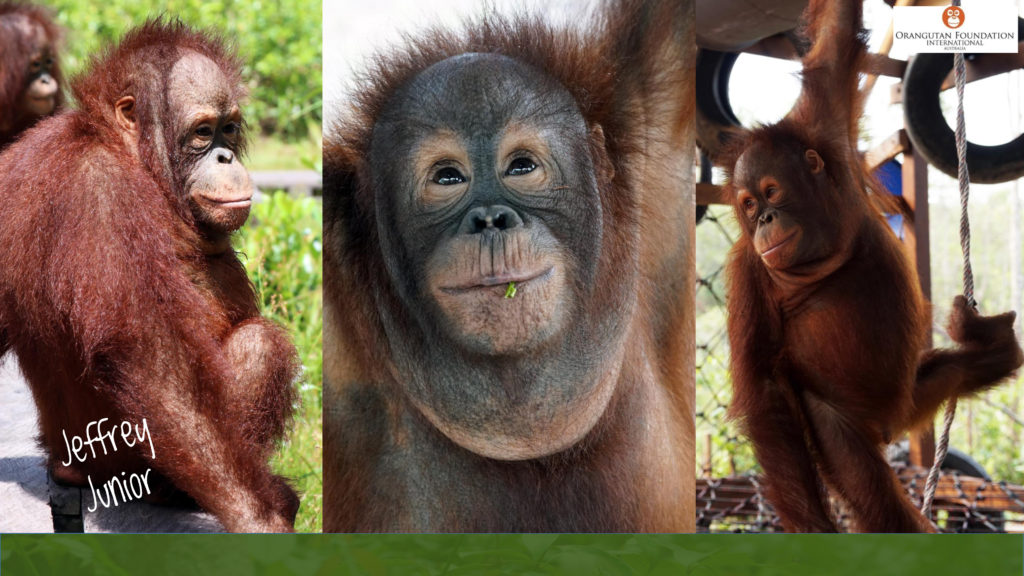