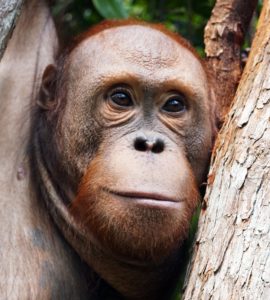 The last six months has seen Tommy settle into a nice routine. He has finally made himself quite at home at his new Pondok (camp) facility. He still journeys far into the forest but he is no longer trying to find his way back to his old Pondok as he once did. Tommy knows this is his new home. He is physically fit and healthy. Tommy’s lack of hair, especially on his head, does make him resemble a chimpanzee or Uncle Fester from The Addams Family somewhat, take your pick. This of no concern to him, however. We have noticed that young males sometimes go through a stage in their development where they have less hair. Hormonal? We don’t know but we do try to increase Vitamin B in individuals’ diets when some hair loss occurs. In any case, Tommy happily rolls around his sleeping enclosure with friends Nash and Valentino. The sleeping enclosure is like a boy’s school dormitory as they crash around and cause havoc within.

Tommy is a gentle soul and, unlike his friends, he retains a light touch. Other orangutans crash about the jungle but he glides softly through the trees. Tommy does spend an inordinate amount of time on the ground causing his caregivers to urge him to climb and spend more time in the trees. Tommy doesn’t seem in a rush though and we know he will get there in time. It takes some orangutan orphans longer than others.

Tommy is a good environmentalist bringing any bits of garbage, big and small, that he encounters in the Learning Forest to his caregiver’s attention. Recently he found an old fruit sack inside some tree roots. He picked it up and began to bring it back. (There isn’t much litter in this forest as only orangutans from the Care Centre stay there.) Valentino and Nash watched this and, overtaken with curiosity, intercepted him. This was the precursor to a small “discussion”. An orangutan “discussion” involves wrestling, tussling and much grabbing. As the three continued tussling (“discussing”) over which one of them would get to take the sack back with him, the caregivers stepped in and finally confiscated it. This broke up the gathering, sending the three of them scurrying off in different directions with Tommy racing up a tree, where he should be. Tommy quickly returned to the forest.  The old fruit sack was not for him or any of them to play with. They got the message! It is the forest and the trees that are for them. The day continued and a good time was had by all up in the trees. The next six months should bring Tommy many more good times for us to report. 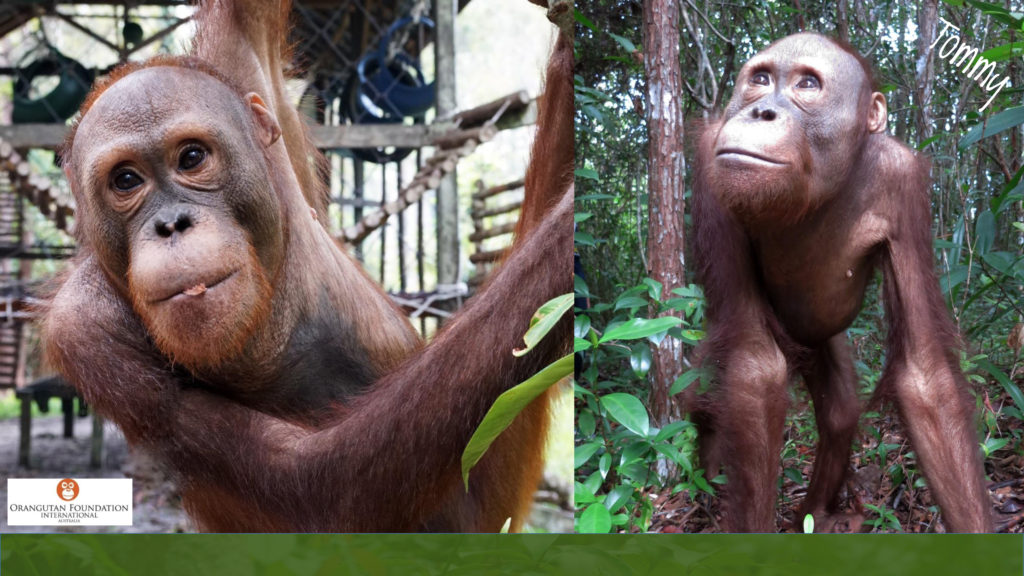