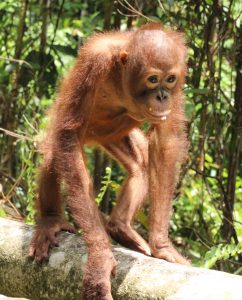 As the months have gone by, Tommy has remained one of the smaller orangutans among his peers. However, in no way has this faltered his development in manoeuvring himself through the forest during daily release. Tommy has grown into a confident climber. With each release he goes higher and higher into the canopy. Being adept at climbing, Tommy has been able to discover, taste, and learn about many of the fruits and other edible foods the forest has to offer.  He continues to build upon this foraging activity repertoire with every climbing adventure.

Typically, on a daily release Tommy will split his time between being high up in the canopy or low down on the forest floor. His first priority will usually be to begin climbing. You can often hear Tommy perched high up in a tree, happily chomping and crunching on fruits or young leaves. When he is satisfied with his climbing adventures, Tommy will slide down a tree trunk and begin playing and splashing in the tea coloured puddles of the forest floor.

Personality wise, Tommy has maintained his calm and kind nature and is always agreeable when the staff call that the daily release is coming to an end. Despite Tommy still showing a shy streak, it is usually reflected in encounters with new people as opposed to his caregivers and orangutan peers. Daily releases are perfect opportunities for Tommy to continue observing from above. He particularly enjoys observing his orangutan peers from a hidden and secluded spot in the canopy.

As Tommy has developed, so has his friendship with orangutan Turner. Both orangutans are almost inseparable during daily release and enjoy climbing on the same tree or one that is adjacent. If Turner and Tommy decide it is time to investigate what the forest floor has to offer, they will do so arm in arm. It is also not uncommon to hear them cry out when they find themselves separated.

It is fulfilling to see Tommy and his dear friend Turner build upon their friendship and learn skills together during daily release. Tommy is developing his knowledge and talents with every release and is growing into a skilful, charming and kind orangutan. The combination of his personality and interests are promising if he is to one day be able to successful return to life in the forest. 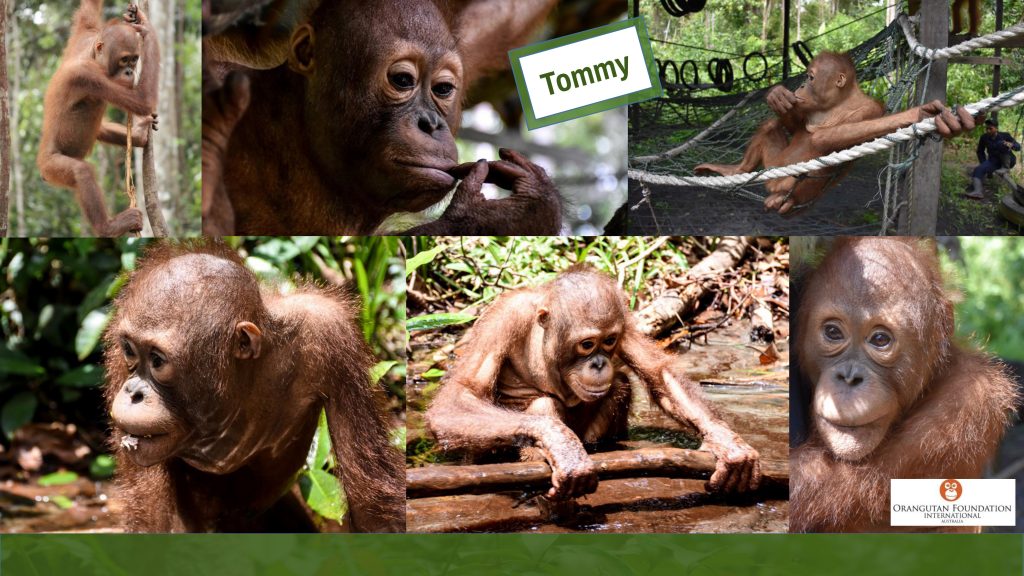