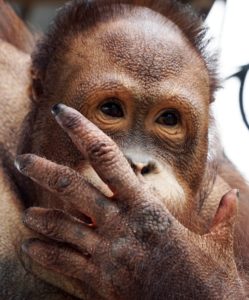 With orangutans actions always speak louder than words and through his actions we get to know Ryan very well. Over the last six months Ryan’s self-confidence has only grown stronger. He is not a fan of being told what to do. If he intends to do something, he will do it in his own way. This is demonstrated by his insistence on sitting down on the boardwalk when it is time for forest release. His caregivers try to get him to walk along but he wants to be carried and he won’t take no for an answer. The caregivers relent and carry him to the trees. Once Ryan has alighted from his caregiver’s back, he is lightning fast, darting this way and that.

He has been honing his foraging skills and finding food all by himself for some time. He samples many different kinds of leaves. On this occasion Ryan decides to investigate one of the many big bamboo plants that can be found in the Learning Forest. He sits there comfortably and tests the bamboo by biting into it. Not satisfied with this he finds that bamboo makes remarkably good leaning posts. Bending the bamboo over he uses the bamboo to access the other trees nearby. That’s the engineer inside popping up. He is lackadaisical, unlike his caregivers, who call out and worry about him cutting himself on a splinter from the bamboo. Ryan is unconcerned as he exits the bamboo stand completely sure of himself. It’s no surprise to the caregivers when he stops, licks the bottom of his foot, and demands some TLC. Lo and behold there is a small cut from bamboo there!

There is no time for this. Male orangutans Wes and Stanley arrive, and Ryan prepares to meet them. Wes and Stanley are a little older and bigger than Ryan, and as such, Wes has no time for play and ignores Ryan. We know that for Ryan the word “no” is missing from his vocabulary and he follows Stanley around trying to engage him. Stanley is at first resistant. It looks like things could get hairy, but Ryan’s natural charm finally wins Stanley over and they begin wrestling. After some time Ryan decides he’s had enough and tries to dash up a tree to get away, but Stanley grabs his leg and yanks him back. The tables have now turned, and the bigger orangutan Stanley is now asserting who is in charge. Maybe Ryan has bitten off more than he can chew. After Stanley finally allows Ryan to leave, Ryan hangs from a tree by one arm taking stock of the situation.

Between the bamboo stems and dealing with the bigger orangutans, Ryan still has a lot to learn about the forest and his own limits. He is still young, and we look forward to seeing him take these lessons to heart as he evolves and grows older, bigger, and gains more experience. 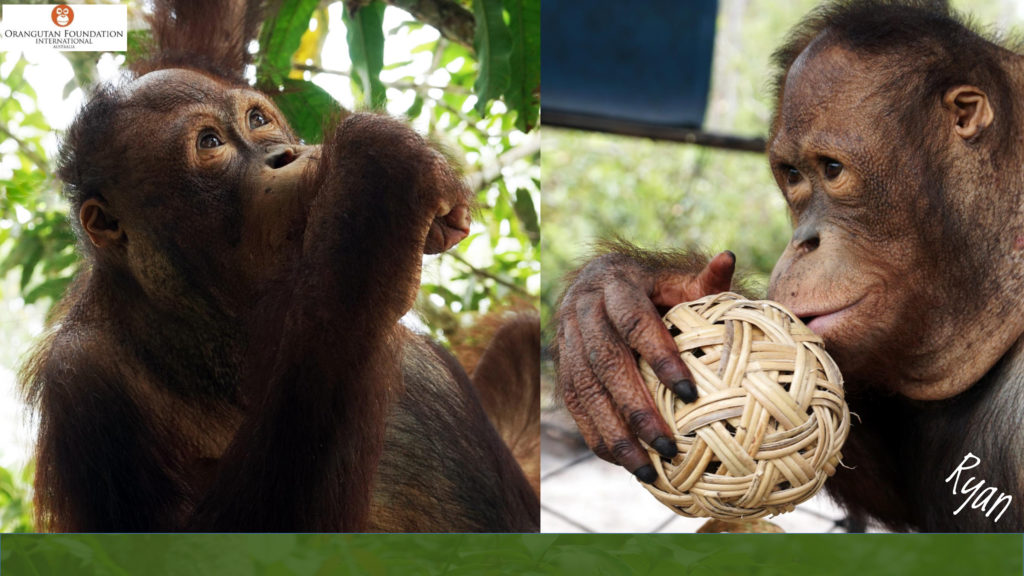